Warning: Use of undefined constant PWP_NAME - assumed 'PWP_NAME' (this will throw an Error in a future version of PHP) in /home/customer/www/outvoyaging.com/public_html/wp-content/mu-plugins/wpengine-common/wpe-sec.php on line 63
 5 Reasons You Should Visit the Medieval Town of Siena, Italy

Siena is one of those cities that grasped my senses and opened my mind to the vastness of beauty that exists in our world.

My first time abroad, back in 2012, I finally understood the phrase “I left my heart in San Francisco.” Except here, swap San Francisco for Siena, and you’ve got my gist. Driving through the medieval walls that surround the historic town of Siena, and into the remarkable collection of uninterrupted aesthetics and character and creativity and art from the ages, my eyes swelled with tears. Ok, I didn’t bawl, and I’m not meaning to sound dramatic, but seriously, Siena is drop dead gorgeous and if you’re anything like me- can and just may bring tears to your eyes. All dramatics and theatrics aside, I’ve contemplated what it is that makes Siena so impressionable to me, and why I constantly yearn to return here year after year.

Could it be the cobblestoned streets and preserved renaissance aesthetics? The gothic appearance of the architecture surrounding the Piazza del Campo? The food, the scents and the energy? The warmth of the Sienese people? Getting warmer.

Walking the streets, through the hills and narrow cobble-stoned alleyways, it truly feels like you’re walking through history.

You can feel that thousands of people, centuries of generations, have worn these streets.

And that integrity & authenticity it’s exactly why it’s on the UNESCO World Heritage list.

I could go on and on, romanticizing about why Siena is so charming and lovable. For organizations sake, I’ve put together a list of 5 Reasons You Should Visit the Medieval Town of Siena, Italy.

Siena’s heart and soul. The entire city is built around this shell-shaped city centre. Its the best place to go at night, whether you’re with good friends, your sweetheart, or both. Grab a seat on the ground and enjoy people watching, sipping, grazing and passing the time with good company.

Plazas like Il Campo are one of my favorite things about European cities such as Siena. It’s just an open space for the community to gather and enjoy the sweetness and simplicity of life.

Grab some local wine or a beer (or whatever your fav beverage is),  a few snacks and spend an evening sitting in the Campo. It’s one of my favorite things to do.

2. You Need to See & Climb the Torre del Mangia

Located in the Piazza del Campo, the Torre del Mangia is one of the tallest towers in Italy.

332 steps will get you to the top of the tower, where beautiful views of the entire city can be enjoyed.

The bell tower been beautifully preserved since its construction around the 1330’s. Even through centuries of wars, destruction, renovation and change- the tower has stayed protected from modern development, serving as a time capsule to the medieval era and its architectural style. It’s one of the most beautiful buildings I’ve ever seen.

The famous Sienese horse race. The Palio is THEE cultural pride and joy of Siena. Every year, twice during the summer (I believe sometime in July, and again in August,) Il Palio takes place. The streets fill with pride as all 17 districts of Siena boost morale in hopes of winning Il Palio. I’ve never actually had the pleasure of attending, however, each time I’ve visited Siena, it was around the time either before or after the Palio. And let me tell ya, you can feel it.

The streets fill with pride as members from each district of Siena wave their flags, sing their songs, and march the hills of Siena, either gloating or boosting morale for their district. It’s quite the experience. You’ll see uniformed drummers from each district, parading the streets in an organized and traditional manner. As for the Palio itself, I can’t share too much since I’ve not attended. However, I do know that they squeeze about 30,000 people into Il Campo for the race that occurs. The horses, with or without their jockeys, are to run the perimeter of Il Campo until one has made it 3 times to place first. Its on my bucket list.. Perhaps next summer when I return, I’ll get to experience it. Stay posted for an update 🙂

In the meantime, if this famous race interests you, theres a great documentary on Netflix called “Palio.” Definitely give it a watch if interested in learning more about what goes on!

Or better, grab a book to read at the airport 🙂


4. To Check out the Duomo Di Siena 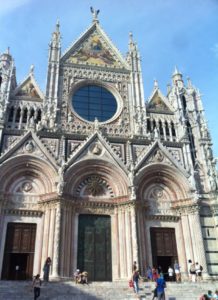 Siena’s cathedral was designed and finished between the years of 1215 – 1263. Its neatly tucked away in to the medieval structures of Siena, and stands out among all of the orange and brown you see covering the city. Its contrast against the rest of Siena will definitely catch your eye- especially if you can get a view of it from somewhere higher up (like maybe the bell tower or if you stay in an air bnb thats “in the hills,” you can get a good view. If not, it’s simply beautiful to approach by front, and enter inside if the time allows.

Another beautiful experience you can have *at night* is to first grab some gelato from Grom (my favorite Gelateria in Siena!! If you don’t try it while you’re there…big mistake!). Afterwards, head over to the Duomo with your Grom Gelato and sit on the steps… enjoy…people watch… relax… soak in Siena at night and appreciate all its action and lights. Truly one of my favorite places in the world.


5. Lastly, the People and the Energy

Siena feels, in a good and beautiful way, much different than anywhere else I’ve traveled. Perhaps I’m biased because I lived here for a short time during my study abroad summer program, but truly- its made a huge impression on me. When I first started researching for Italy, before I had been, I instantly thought-

It is more humble than the larger cities, and in turn is also a little less bombarded (unless Il Palio is going on), but either way, I’ve never met a single soul who’s regretted experiencing Siena and never wants to return. I know how time can be crunched when planning a trip to Italy (or anywhere for that matter), and Siena just may not make it to your list. Hopefully after this post, your interest is piqued, or at least you vicariously appreciate the beauty and charm that is Siena.

Thanks for reading! Have you been to Siena? If so, what was your experience? I’d love to hear about it… Grom?? Have you tried it? Drop me a comment!

Some of my favorite travel items: 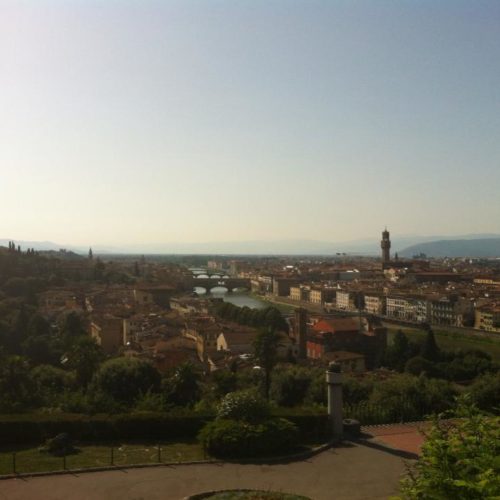 Firenze: The Wonderful Florence Italy
Warning: Use of undefined constant PWP_NAME - assumed 'PWP_NAME' (this will throw an Error in a future version of PHP) in /home/customer/www/outvoyaging.com/public_html/wp-content/mu-plugins/mu-plugin.php on line 140